Approx. 24hrs of work, but totally and beyond worth it: this Restaurant Day most likely blew away many of those who are sceptic towards raw foods, but also was something special to those already dedicated to the subject.

The mouth-watering super-delicious [insert other phrase words here] menu was the following:

I think everyone left the place happy and satisfied. We had time to tour around other places after wrapping up our pop-up restaurant. There was a lot of entrepreneurship going on in different parks in Helsinki, and apparently the offerings were very versatile (437 restaurants!). We were treated to a free shot of tequila and pureed cranberry juice served on a block of wood, and we also popped by a paleo cafe, but unfortunately I was too full to try their cookies or sandwich. I don’t know which is more fun: to organize a restaurant or to visit several places and sample different things. If the menu is as good as ours, I think I prefer to be in the kitchen!

This week I’ll stay in Helsinki for Boris‘ raw food courses, where I’ll be assisting. Despite the pouring rain, this is going to be a good week!

Restaurant Day “food carnival, where anyone can start a restaurant”, started in Finland on May 21st, 2011, when there was 45 pop-up restaurants in 13 cities. On the 8th Restaurant Day on May 18th, 2013, there was 1701 restaurants in over 200 cities in 30 countries. Not bad for a guerrilla activity that defies the laws and hygiene regulations. Over 45 countries in total have had these pop-up restaurants, cafes or something alike where people sell home-made dishes, treats and drinks. The event has won several prizes in different countries, no wonder why! So far there has been restaurants serving food in backyards, parks, from apartment windows to a yurt! 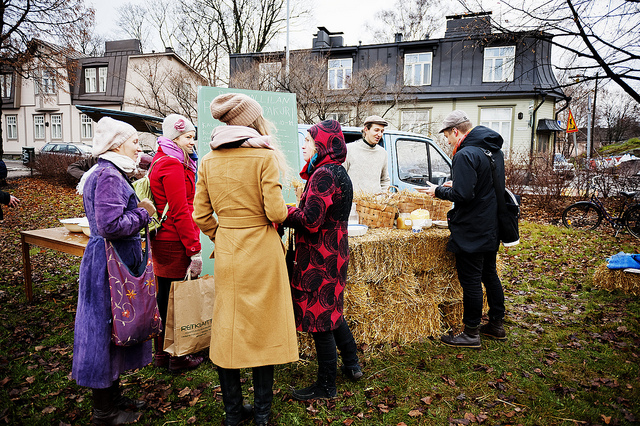 I have participated in Restaurant Day twice, but then I left the country and missed few of the most recent ones. I have been a huge fan and intrigued by the concept and idea of sharing something that you’ve made with effort and love.

This time, it will be something more than just baking few cupcakes: Raw Food chef/guru Boris Lauser has come from Berlin to serve delicious Asian gourmet dishes at Raaka baari. We started preparing today, and will continue tomorrow and Sunday morning. If I said I was pretty stoked, that’d be an understatement. So far, we’ve made chocolate blueberry cheesecake, dipping sauce for Chinese dumplings, marinade for dehydrated almonds that will be used for pad thai. I had an idea of making a berry crumble pie, and Boris got exited – so I came up with a recipe for that. If it becomes a success, maybe after the restaurant day I’ll post it here! The menu will also include spring rolls, in addition to the dumplings and pad thai. In addition to sushi, those are my favorite Asian dishes! This weekend I’ll be cooking up a storm, smelling and tasting amazing flavors, and learning a lot while enjoying the raw cuisine…and hopefully I’ll get to enjoy the Restaurant Day, too! There will be over 400 restaurants in Helsinki alone.

Yum-mee. Next week: Boris’ raw food courses. Have you heard of/been to any Restaurant Days? Would you consider organizing something?